The exploration of underwater resources at great depths is a challenge, as it requires sustainable capacities to control, observe, navigate and transport information.

The exploration of underwater resources at great depths is a challenge, as it requires sustainable capacities to control, observe, navigate and transport information.

In order to address this challenge, INESC TEC, through the Centre for Robotics and Autonomous Systems (CRAS), joined forces with the School of Engineering of Porto (ISEP), the A. Silva Matos Metalomecânica company, the Navy and IPMA in order to develop the SIDENAV - Smart Infrastructure for Deep Sea Navigation project, whose closing session was held on 10 July. This ceremony included a public presentation of results, as well as a demonstration carried out off the Sesimbra Port.

The challenge imposed by the seabed

Approximately 70% of the Earth's surface is covered by water, but currently less than 10% of the seabed that is beyond 200 meters of depth is known (International Hydrographic Organisation). The Portuguese sea floor and seabed are generally located at a large depth (approximately 4000 m), which makes their exploration difficult. A better understanding of the seabed would allow to map zones and reliefs, to know more about the available marine resources or even to understand the origin of some natural phenomena.

The SIDENAV project aimed to develop a demonstrator capable of validating and applying the technology developed under the TURTLE project, which consists in the creation of a relocatable underwater mobile infrastructure that, on the one hand, ensures the tracking of underwater equipment and industrial machines in an operating situation (e.g. infrastructure inspection, underwater mining, etc.) and, on the other hand, is able to monitor the impact of such operations on the environment.

The TURTLE robot, the first deepwater robotic platform that was fully developed in Portugal, serves both civilian and military purposes, by carrying a set of sensors that allows the oceanographic monitoring and by being able to autonomously stay at sea for long periods of time. 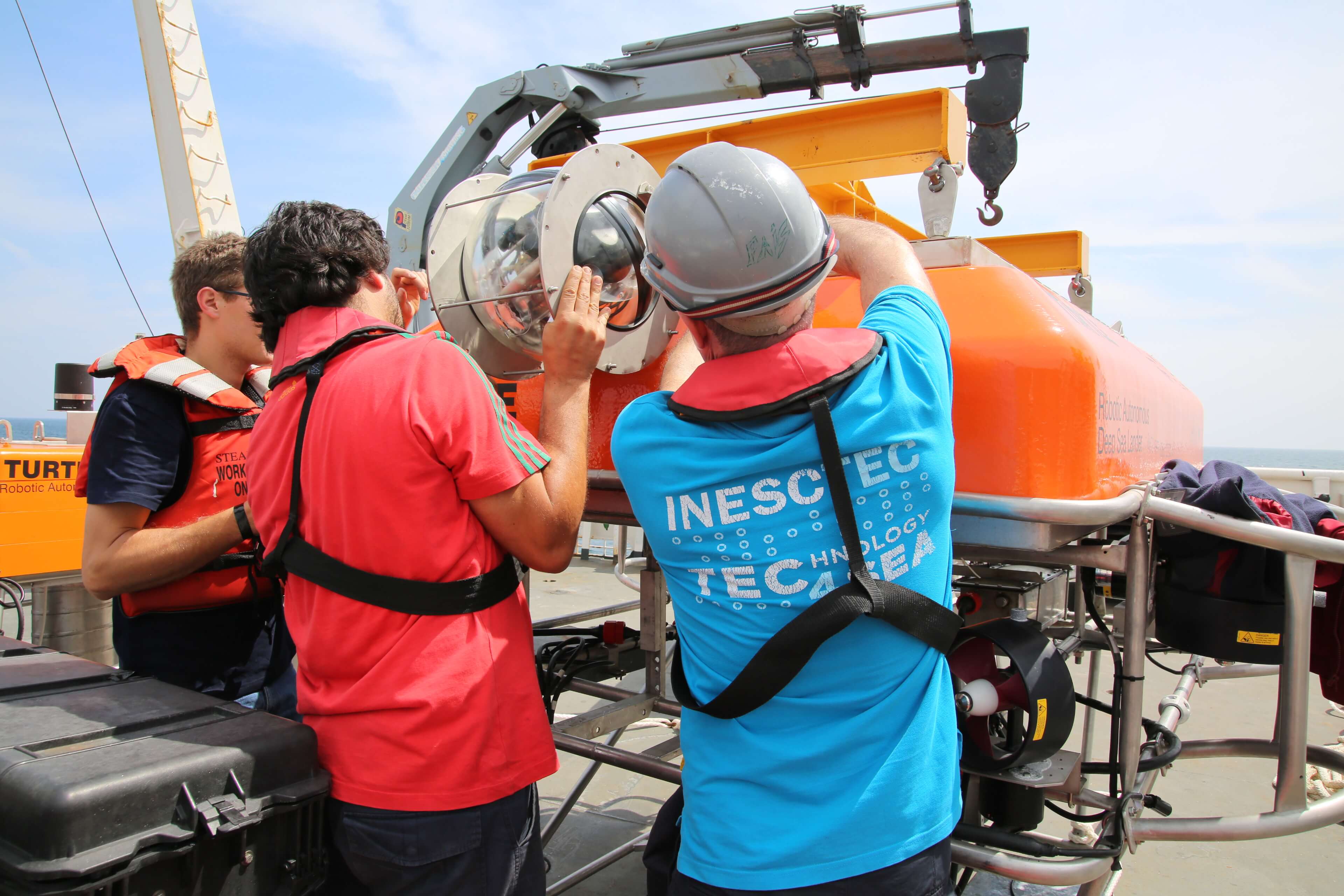 The demonstration of the underwater tracking system

It was with the support of the Portuguese Navy that the SIDENAV team boarded, for the first time, the NRP Almirante Gago Coutinho ship, a vessel specifically designed for support missions related to scientific research. The team were aboard since 8 July for final tests and verifications. Throughout these days of testing, the goal was to assess whether a group of TURTLE robots could locate another robot that was on the surface, which in this case it was the EVA robot. And that goal was achieved.

First of all, three TURTLE platforms, mobile tracking infrastructures, carried different types of sensors capable of monitoring the surrounding environment. These platforms created a type of satellite network that allows the long-term autonomous robotic navigation that can go up to 1000 metres of depth. Then, the EVA robot was launched, an autonomous underwater vehicle (AUV), developed by INESC TEC for supporting the mining activity, and that served as a pretext for the TURTLE’s guidance work.

“An example of the applications of this project is that we can support a mining machine in the seabed, helping in its positioning”, explains Hugo Ferreira, one of the researchers from CRAS who is associated with the project. “This way, we not only demonstrated SIDENAV, but also all the capabilities that INESC TEC has and that go far beyond TURTLE.”

Up until now, tracking systems were placed in the seabed without the possibility of being relocated. This new technology allows a more continuous progress in the exploration of the seabed, respecting the need to move the working area. Besides being capable of moving towards a new position, thus defining a new working area, TURTLEs will make it easy to raise and lower data collection in the water column and can integrate other equally important sensors in order to monitor the oceans. 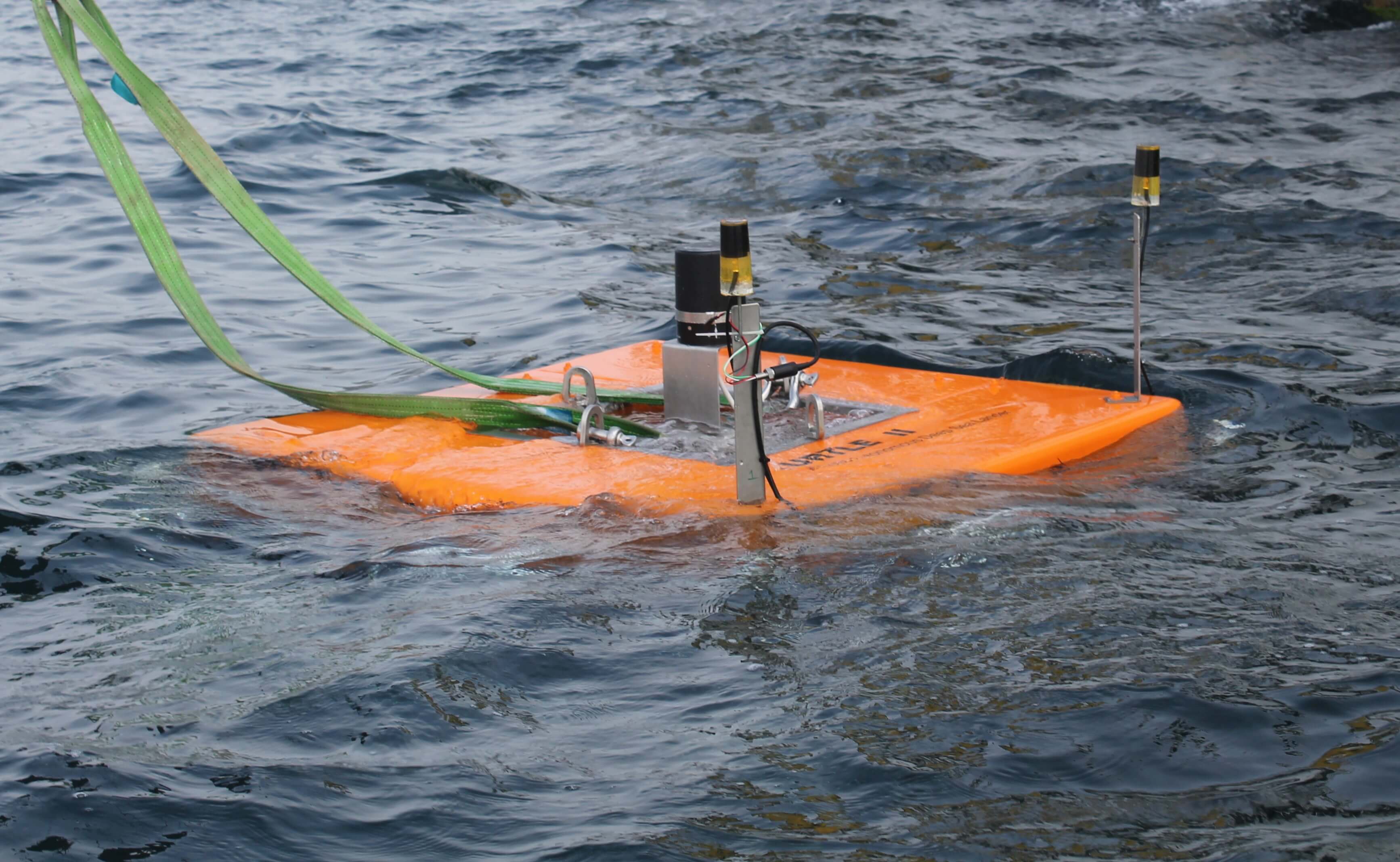 The SIDENAV project was funded by Portugal2020 and COMPETE2020’s programmes under the Support System for Scientific and Technological Research (Business RTD) that resulted in a total incentive of over EUR 1 200 000. The consortium was composed of A. Silva Matos Metalomecânica, INESC TEC, School of Engineering of Porto (ISEP), Portuguese Navy Research Center (CINAV) and IPMA (Portuguese Institute for Sea and Atmosphere).

This way, SIDENAV will attend the National Ocean Strategic (NOS 2013-2020), which is based on a model for the sustainable development, being led by the proposal of the European Commission for the maritime sector known as “Blue Growth”.