Underwater mining is already possible and has signature of INESC TEC

Underwater mining is already possible. It proved to be both economically profitable and favourable for the environment.

Underwater mining is already possible and has signature of INESC TEC

Underwater mining is already possible. It proved to be both economically profitable and favourable for the environment.

Ore mining in abandoned and flooded mines is possible due to the development of a robotic system, which is mainly composed by a 25 tonnes underwater mining vehicle, an autonomous inspection submersible and a barge to support the operation.

The largest vehicle is a 25 tonnes robot with the ability to cut rocks and to pump the extracted materials back to the surface, while also being equipped with a hydraulic arm with interchangeable tools. The smallest one, known as EVA, moves around the mining site, constantly updating a 3D map of the area and transmitting this mapping to the largest vehicle in order to assist the navigation. The EVA robot was created by researchers of INESC TEC’s Centre for Robotics and Autonomous Systems (CRAS), as well as all the sensory systems that allow the navigation and the operation of the 25 tonnes robot.

All this has been possible due to the European project VAMOS (Viable Alternative Mine Operating System), which has a budget of more than EUR 12 million and was funded with EUR 9.2 million by the European Commission's Horizon 2020 programme, it aims at exploring underwater landmines.

The two robots use multiple sensors for the high accuracy navigation and positioning, as well as for the observation of the surroundings. Therefore, combining the information from sonars, cameras and a laser telemeter that allows the operation of the system, wherever they are and under any visibility conditions. The collected data, after being processed and combined, are then sent to a pilot in the control centre who is able to see them on a multi-screen console in a virtual reality environment. A future version can also be able to see the type and the concentrations of ore as it’s being mined, thus allowing to continue the exploration of the richest ore and to stop the investment in the poorest one. This information is provided by the classification and evaluation system of ore, being done by laser induced plasma spectroscopy, which has also been developed by INESC TEC's researchers, more precisely from the Centre for Applied Photonics (CAP). 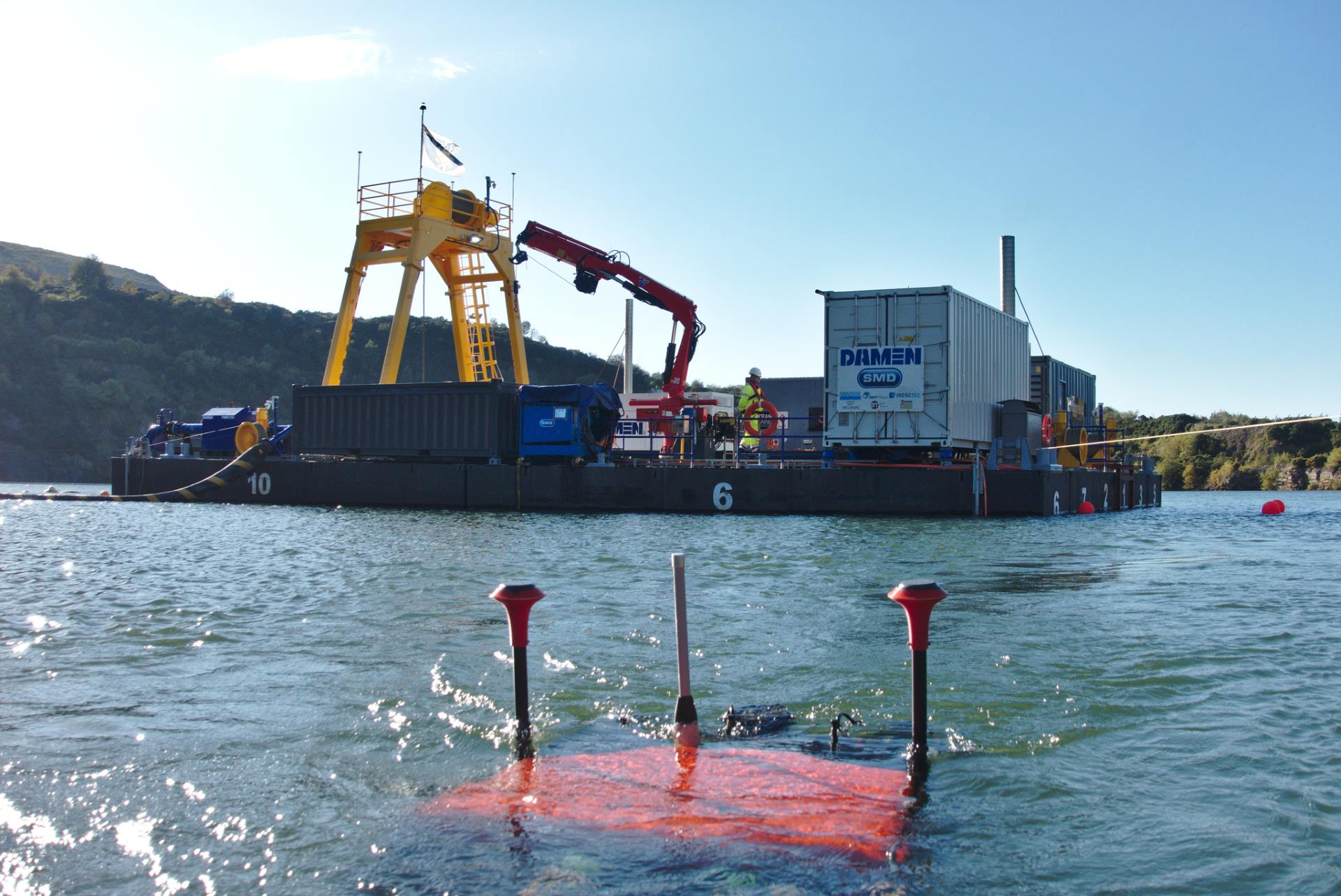 EVA is a versatile and multifunction vehicle that combines the high accuracy positioning and navigation capabilities with a unique set of observation sensors such as 3D multi-beam sonars, cameras and light systems that are structured to the three-dimensional perception of the environment, with omnidirectional moving capacities.   These unique characteristics for a robot with these dimensions allow its effective use in mapping applications in initial surveys and in detailed inspection and support to the operation of the mining machine.

“EVA is able to operate underwater for about seven hours, and only at the end of that period it’s necessary to change the three 1 kilowatt batteries, a process that takes five minutes, or return to the charging station. The robot has the ability to descend to 500 metres of depth, but some sensors that are part of EVA already have the ability to descend to 3 000 metres. Since it can be easily adapted, the short-term goal is to make it capable of descending to up to 1000 metres of depth”, explains José Miguel Almeida, coordinating researcher of CRAS and Professor at ISEP.

After being successfully tested in Ireland, the EVA robot is currently at INESC TEC’S Laboratory for Robotics and Autonomous Systems, located at the premises of the School of Engineering of Porto (ISEP).

The VAMOS project was tested for two months in the Silvermines, Ireland

The tests of this robotic system in the flooded mine of Magcobar in Silvermines lasted for two months. According to José Miguel Almeida, “VAMOS was one of the most demanding projects in which we participated. For two months, we mobilised research teams to be in mining environment, day after day. Briefings started at seven a.m. and the robotic system couldn’t stop until the end of the day, so our level of readiness had to be high, something that is completely contrary to the normal operation of a research process. Achieving the collaboration between multidisciplinary teams composed by elements from several industrial partners with different methodologies, as well as research institutes and other academics with different backgrounds and interests, was a learning process. What happened in Ireland was unique in this area”.

Seventeen heavy goods vehicles were necessary in order to transport all of the VAMOS' system, including the 25 tonnes robot, the barge and the control centre. The entire operation took several months just to prepare all of the logistic aspects. After nearly two months of testing, there was space for two public demonstrations. Eighty-five people participated in these demonstrations, ranging from members of the 17 partners that are part of the project, to geologists and researchers from companies and institutions external to the consortium and even to local population.

Besides having the opportunity to see the explanation by the members of the consortium about the concepts related to the development of the project and future implementing ideas, the participants of the session went by boat across the lake to the launching and recovery ship, where they could see the mining robots being implemented and removed from the bottom of the mine in which they were working for a few weeks. The operations, which sometimes reached up to 57 metres of depth, consisted in the cutting and operation of the material in several situations, subsequently pumping the cut material into a repository located on land for a later evaluation and characterisation of the efficiency of the process.

The control cabin and the data centre were also presented to the visitors, where they had the opportunity to have a practical experience with the human-machine virtual reality interface. It is from these places that all the technological components are controlled and the operations of data collection in real time are collected.

José Miguel Almeida explains the importance of this type of projects for the European Commission: "the European Commission's concern when investing in this type of projects is mainly related to the dependency on the external in order to obtain raw materials that are key to the industries and how to explore the resources that it holds. Even though the majority of the mines, at the time that they were closed, weren't economically viable, the truth is most of them has an extremely high number of raw materials and for that reason, they may become profitable once again”.

Nowadays, the European Union consumes 25 to 35% of the metal produced worldwide, while the mineral extraction in Europe only amounts to 3% of the worldwide production of ore, which means that the EU imports about 200 million tonnes of minerals per year. 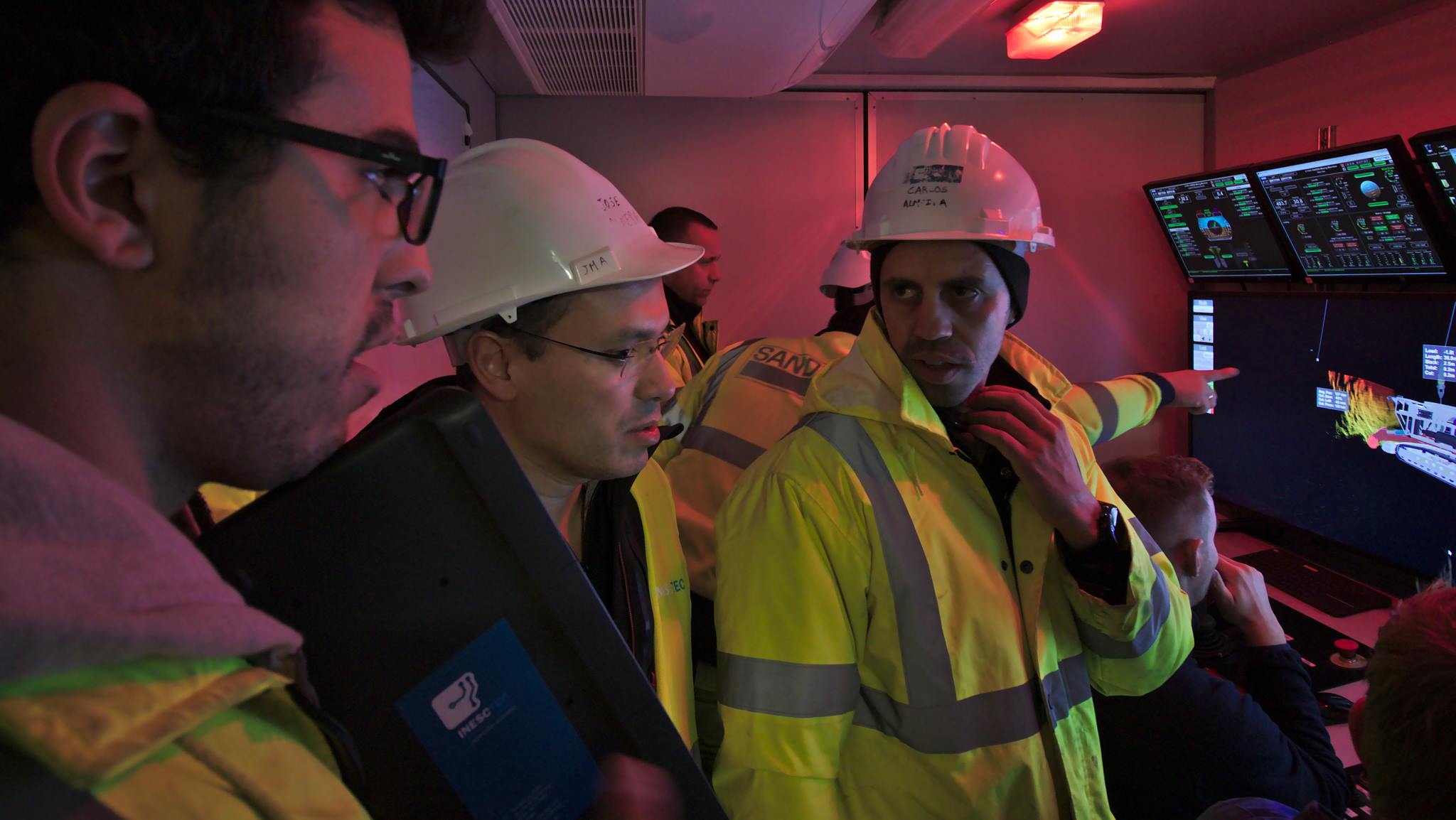 The inventors of the robotic system

Even though this consortium is composed of 17 partners from nine European countries, the main institutions responsible for the development of these robots were essentially five: SMD (United Kingdom), BMT (United Kingdom), DAMEN (the Netherlands), INESC TEC (Portugal) and SANDVIK (Germany).

VAMOS, which lasted for four years, is almost coming to an end and there is already an expression of interest in transferring technologies like EVA and the navigation and mapping systems to the market.

"If there is indeed an interest in transferring EVA to the market, then it's going to be necessary to adapt the prototype into a product, which will make it necessary to standardise the operations in order for anyone, whether a specialist or not, to be able to operate the robot", concludes José Miguel Almeida.

The INESC TEC team that participated for over four years in this project, is composed by researchers from CRAS and CAP. The researchers of CRAS who helped in the development of the VAMOS system were: Alfredo Martins, António Ferreira, Bruno Matias, Caio Lomba, Carlos Almeida, Eduardo Silva, Eduardo Soares, Henrique Silva, José Miguel Almeida, Ricardo Pereira and Tiago Pereira. The researchers of CAP who participated in this project were Pedro Jorge, Rui Martins and Miguel Ferreira.

The researchers mentioned in this news piece are associated with P.Porto-ISEP and INESC TEC.