The biggest European project led by a Portuguese entity has started

The European project InterConnect, the biggest project ever led by a Portuguese entity, has started. INESC TEC is responsible for the leadership of this EUR 36 million project, which has 51 partner institutions from 11 European countries and that aims at digitalising the power system.

The biggest European project led by a Portuguese entity has started

The European project InterConnect, the biggest project ever led by a Portuguese entity, has started. INESC TEC is responsible for the leadership of this EUR 36 million project, which has 51 partner institutions from 11 European countries and that aims at digitalising the power system.

InterConnect will develop solutions for a digitalisation of the power system based on architectures for the Internet of Things which, with the help of several digital platforms and by using a universal ontology called SAREF, will ensure the interoperability between equipment and systems while preserving the privacy and cybersecurity of data of different users.

“At the end of the project, it is expected that reference architectures will emerge in the interoperable domains of IoT, interoperable functional components for residential and non-residential buildings, an improved customer energy management, a digital Marketplace and an interoperability toolkit, an interoperable and replicable interface to be used by the energy distributors, new business models for new energy services and non-energy services and regulatory recommendations”, explains David Rua senior researcher at the Centre for Power and Energy Systems (CPES) and InterConnect’s leading researcher.

There are three INESC TEC centres that are part of InterConnect: the Centre for Power and Energy Systems (CPES), the High-Assurance Software Laboratory (HASLab) and the Centre for Telecommunications and Multimedia (CTM).

On 15 and 16 October, around 130 people gathered at the Estádio do Dragão for the official kick-off meeting of the InterConnect project.

Throughout the two-day meeting, the institutions responsible for each of the project’s working groups had the opportunity to present the goals, the targets to be achieved and what is expected from each of the participating institutions.

The project is divided into eleven work groups. INESC TEC is the project coordinator and, for that reason, is responsible for the management work package. It also has the leadership of the work groups related to the large-scale demonstration and integration of solutions and the communication, dissemination and exploitation of the results of the project. The Dutch R&D institution TNO, which is InterConnect’s technical and innovation coordinator, is also responsible for a work group called “Interoperability in smart homes and grid reference architecture”. 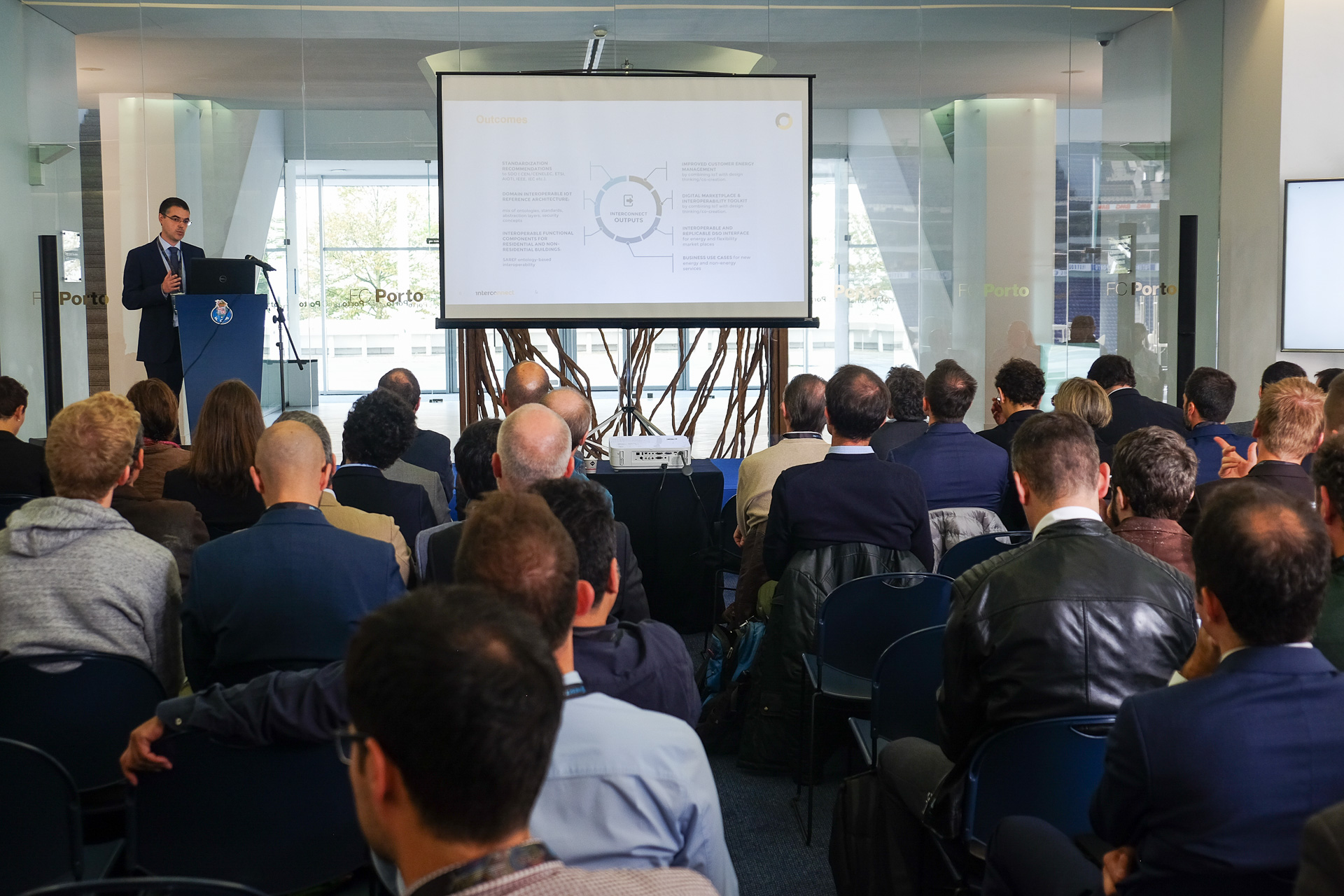 The first working group, led by EEBUS, is related to case studies, business models and services; the third one, led by VITO, is called “semantically interoperable components, applications and devices for smart homes and buildings”; the fourth work package, led by EDP Distribuição, relates to the smart grid framework for an interoperable electrical system. The fifth working group, led by VizLore, but with a large participation of INESC TEC through its High-Assurance Software Laboratory (HASLab), is entitled “Digital Platforms and Marketplace”. The sixth work package, led by Th!nk-e, concerns the preparation, coordination and monitoring of the seven pilots of the project.

The last two work, led by FundingBox and Wings respectively, are related to the promotion of innovation through open calls for the prototyping or small-scale demonstration with the project’s sustainability, including issues related to InterConnect’s community, societal impact, among others.

The first day of work was dedicated to the presentation of all the work groups, whether in a plenary session or in more specific discussion in parallel sessions, with the exception of the groups related to the pilots and the sustainability of the project.

There are seven large-scale demonstrations that the InterConnect project will develop starting from the second year in Portugal, Belgium, Germany, the Netherlands, Italy, Greece and France.

Also on the second day of the meeting, the General Assembly of the project appointed InterConnect’s Technical Committee, which is led by INESC TEC, as leader and composed of the work packages’ leaders. It was at the technical committee’s meeting, which served as the closing of the work, that the Technical and Innovation Committee, coordinated by TNO, was appointed. 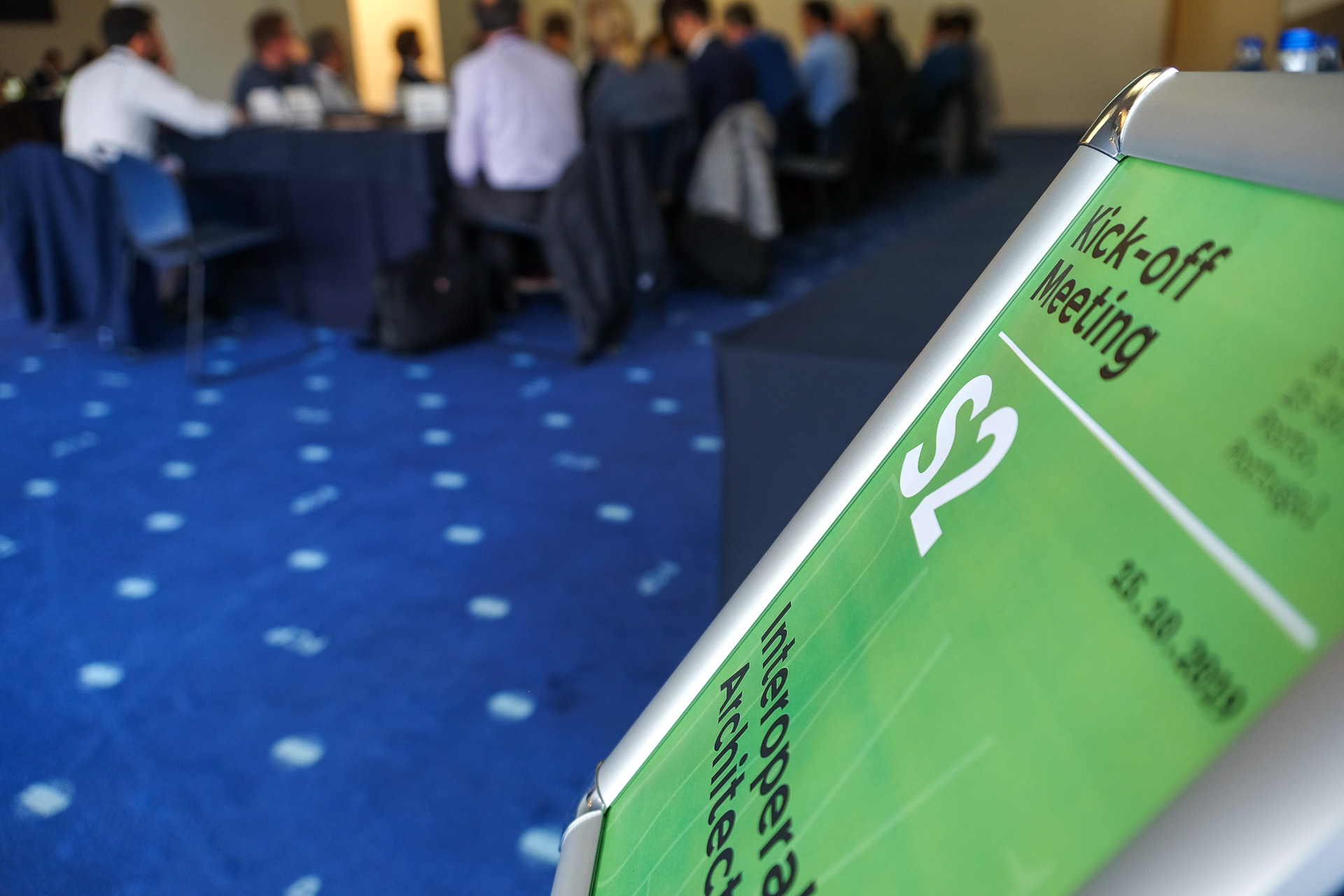 The results that the InterConnect project aims at achieving by the end of 2023 will be possible due to the joint effort of 51 partners divided into six different typologies: R&D and consulting, manufacturers and associations, IoT and/or ICT service providers, Distribution System Operators (DSOs), retailers and end users.

The project’s R&D institutions include the coordinator INESC TEC (PT), and the innovation coordinator, TNO (NL), but also IMEC (BE), VITO (BE), Athens University of Economics and Business (GR), Vrije Universiteit Brussel (BE), Fraunhofer IEEE (DE), Yncréa (FR), Politecnico di Milano (IT), RSE SpA – Research on Energy System (IT), Universität Kassel (DE), Vrije Universiteit Amsterdam (NL), German Research Center for Artificial Intelligence – DFKI (DE) and the University of Applied Sciences and Arts, Studieren in Dortmund – UASD (DE). The project’s consulting companies are composed of 3E (BE), Th!nk-E (BE), Gfi (BE), Trialog (FR) and FundingBox (PL). The following entities are part of the manufacturer group: Schneider Electric (PT), ABB (BE), Whirpool (IT), Bosch Siemens (DE), Bosch Termoteknik (DE), Wirelane (DE), Vaillant (DE), OpenMotics (BE), Daikin (BE), Miele (DE) and ThermoVault (BE). The associations that are part of this consortium are KNX (BE), EEBUS (DE) and EDSO for Smart Grids (BE). The InterConnect partners belonging to the IoT and/or ICT service provider typology are WINGS ICT Solutions (GR), cyberGRID (AT), Sensinov (FR), GridNet (GR), VizLore (SRB), Cosmote (GR), KEO (DE), DuCoop (BE) and Domótica SGTA (PT). The DSOs that are part of this project are EDP Distribuição (PT), Elektro Ljubljana (SL) and ENEDIS (FR). Three partners belong to the retail category: SONAE (PT), HERON (GR) and ENGIE (FR). In the end users category, there are four partners, in which the Portuguese company SONAE is also included in this typology and not only on the retail one. PlanetIdea (IT), iCity (NL) and Cordium (BE)

This project was funded by the European Union’s H2020 research and innovation programme under the grant agreement No. 857237.

The researcher mentioned in this news piece is associated with INESC TEC.