For the second time, INESC TEC organised the Workshop IN THE BLACK’19, with the support of the European Institute of Innovation and Technology (EIT Raw Materials), with the theme: “Exploration, Extraction and Construction Opportunities for Underwater Technology”.

For the second time, INESC TEC organised the Workshop IN THE BLACK’19, with the support of the European Institute of Innovation and Technology (EIT Raw Materials), with the theme: “Exploration, Extraction and Construction Opportunities for Underwater Technology”.

The participants, coming from several areas (engineering, geology, biology, robotics, digital, among others) anticipated challenges and solutions for the development of underwater geo-technologies.

The importance of mineral resources in Europe

Raw materials have an increased importance in society as a whole, namely in the transition of the green economy, being crucial for reaching the goals established by the United Nations in terms of Climate Changes and Sustainable Development.

At the same time, the distribution and the consumption of metals, minerals and other materials are important in the transition towards a Circular Economy. In addition to this, the emerging energy and mobility technologies created a strong demand for raw materials.

However, Europe highly depends on foreign countries in terms of mineral resources such as copper or nickel, importing around 200 million tonnes of minerals per year. On the other hand, there are plenty of mines in Europe with unexploited resources. The problem is that the majority of the underground mines are flooded and its exploitation is difficult and expensive.

In order to address these challenges, it’ll be necessary to design more intelligent solutions for the sustainable development. According to the CEO of EIT Raw Materials, Karen Hanghøj, the strategy of the Institution itself for developing innovative technologies has been focused on supporting Up-Scalling projects and startups in Europe.

This scenario was the starting point for another “IN THE BLACK” workshop, which was organised by INESC TEC on 27 June at the School of Engineering of Polytechnic Institute of Porto (ISEP).

The workshop, which was organised with the support of the EIT Raw Materials consortium and the TEC4SEA infrastructure, was focused on the robotic technologies, autonomous systems, virtual reality software, cable inspection, spatial analysis and the creation of databases and the mapping of mineral resources in Europe. But, in particular, it aimed at the sea mining, environment, legal aspects and future challenges of this activity as a solution to suppress the lack of raw materials in Europe.

In this “Exploration, Extraction and Construction Opportunities for Underwater Technology” workshop, the global scenario for the potential of the deep sea was established, including underwater mining. Real experiences were discussed, challenges were anticipated and ideas for new solutions were launched, some of which are already being developed by INESC TEC.

“Besides strengthening the relationships between EIT Raw Materials partners and bringing together national and international players in innovation and mining, IN THE BLACK aimed at redefining future strategies and partnerships in projects. This year’s theme is much more comprehensive, expanding the network of partnerships and increasingly reinforcing the IN THE BLACK community”, explained the researchers and organisers of the event Ana Pires (ISEP / INESC TEC) and Paula Lima (INESC TEC).

In order to strengthen partnerships in the national and international business and industrial world, the event began at the Centre for Robotics and Autonomous Systems (CRAS) with a technological exhibition, which included the UX1 and EVA robots developed under the European projects H2020 "UNEXMIN” and “VAMOS”, respectively.

Stef Kapusniak's (Soil Machine Dynamics Ltd) and Karen Hanghøj, CEO of EIT Raw Materials, were responsible for opening the session. At the very start, they left the entire public "immersed" in this IN THE BLACK spirit, which aims at establishing a bridge between underwater technologies and mineral resources. 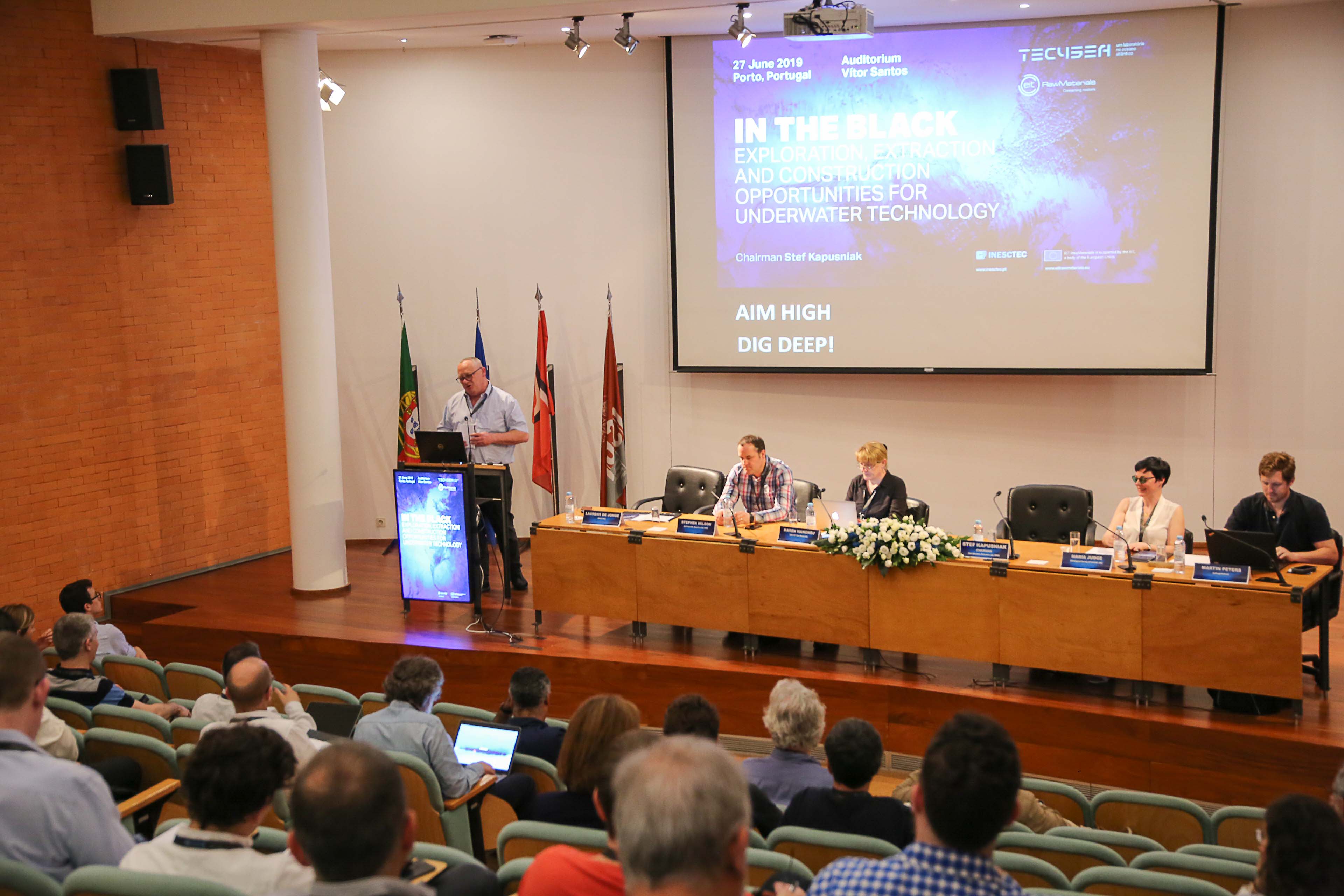 Topics related to circular economy, new technologies for cable detection and monitoring, mining systems in marine environment, mapping solutions and their underwater application, among other topics, were discussed.

Michel Vanavermaete, the Innovation Hub Director CLC West at EIT Raw Materials and Eduardo Silva, Coordinator of CRAS and Professor at FEUP closed the session, dropping hints for the future and praising the importance of this type of event.

INESC TEC – a pioneer in the underwater mining for 10 years

For around 10 years now, INESC TEC has identified the need to invest in underwater robotic technologies for the exploration of the seabed, but also for the mapping of geological resources.

The contribution of CRAS in this area is now acknowledged and evident in the results and demonstrations of projects UNEXMIN ("An Autonomous Underwater Explorer for Flooded Mines” - related to the development of an underwater autonomous robot for flooded mines) and VAMOS ("Viable Alternative Mine Operating System” – related to the development of an operating and alternative system for underwater mining in flooded quarries).

However, there is still no mining in the deep sea. Portugal and France are countries with potential to explore mineral resources in the seabed, however, the Atlantic Ocean is “a very complicated environment”, states Eduardo Silva who justifies that: “The sea brings increasing challenges. Whereas on the ground, the environment is controlled (there are no waves, for example), mining in the sea is much more complex and more expensive”, adds the researcher.

Already thinking about these future challenges, INESC TEC has submitted two Up-Scaling projects that were financed by EIT Raw Materials, both of which will start in 2020 and will last for three years, presenting a consortium composed of several countries with academic or industrial origin.

The UNEXUP project is an evolution of the robot developed in the UNEXMIN project, but with the goal of making it more operational and with a perspective of creating a product to the mining market.

The Insite (In­situ ore grading system using LIBS in harsh environments) project consists in the development of a portable LIBS (Laser Induced Breakdown Spectroscopy), applied to extreme environments such as underwater and hyperbaric environments, anticipating a possible future use in sea mining or flooded mines, based on laser-induced plasma spectroscopy.

“These two challenges will bring many innovations and contributions to the development of the exploration of mineral resources and even cross the deep sea border," concludes Eduardo Silva.