From 4 to 12 July, the 2019 edition of “VISUM Summer School” gathered more than 50 researchers from 24 different nationalities in the city of Porto. The initiative, which was held at the premises of the Portucalense Infante D. Henrique University (UPT), was organised by INESC TEC and had computer vision and artificial intelligence as its theme.

From 4 to 12 July, the 2019 edition of “VISUM Summer School” gathered more than 50 researchers from 24 different nationalities in the city of Porto. The initiative, which was held at the premises of the Portucalense Infante D. Henrique University (UPT), was organised by INESC TEC and had computer vision and artificial intelligence as its theme.

Professionals of the academia and industry who work in this area, researchers and even Master’s students or PhD candidates were present in this edition, coming from European countries such as Italy, Germany, Ukraine, Slovenia, the Czech Republic, France, Denmark, Norway, Sweden, Belgium, Russia, Lithuania, Spain and Austria and also from more remote places such as Iran, India, Ethiopia, Nigeria, Pakistan, Mexico, Bangladesh, Costa Rica, the USA, China or the United Arab Emirates.

“Our goal was to convey some theoretical notions to the participants, and then present them with practical challenges. That was why our panel was divided into academic speakers from Portugal, the USA, the Netherlands, Ireland and Switzerland, but also into specialists from the industry, of companies such as Bosch, Farfetch, Fraunhofer, among others. All speakers are internationally recognised professionals in the computer vision and artificial intelligence areas”, explains Ana Rebelo, a researcher of INESC TEC's Centre for Telecommunications and Multimedia and one of the organisers of the School.

In addition to the sessions dedicated to the several proposed themes, the participants had the opportunity to be closer with companies of the area on Saturday, 6 July. On this day, dedicated to the industry, there was a company exhibition and a debate on the theme: “Dos artigos de investigação às aplicações reais: desafios e dificuldades”(in English: “From research papers to real life applications: challenges and difficulties”), moderated by Daniel Catalão, with the participation of representatives from Farfetch, Deloitte, Bosch, ASML and FEUP.

Throughout the week, the participants developed a project, taking advantage of the classes they previously took. The winner group, which was composed of Cláudio Sá (University of Twente), Lise Stork (Leiden University) and Kemilly Dearo (University of Twente), was awarded a set of 3 NVIDIA RTX 2080 DL training kits, offered by Bosch PT. The winner group presented a project that aimed at the detection of objects inside vehicles. 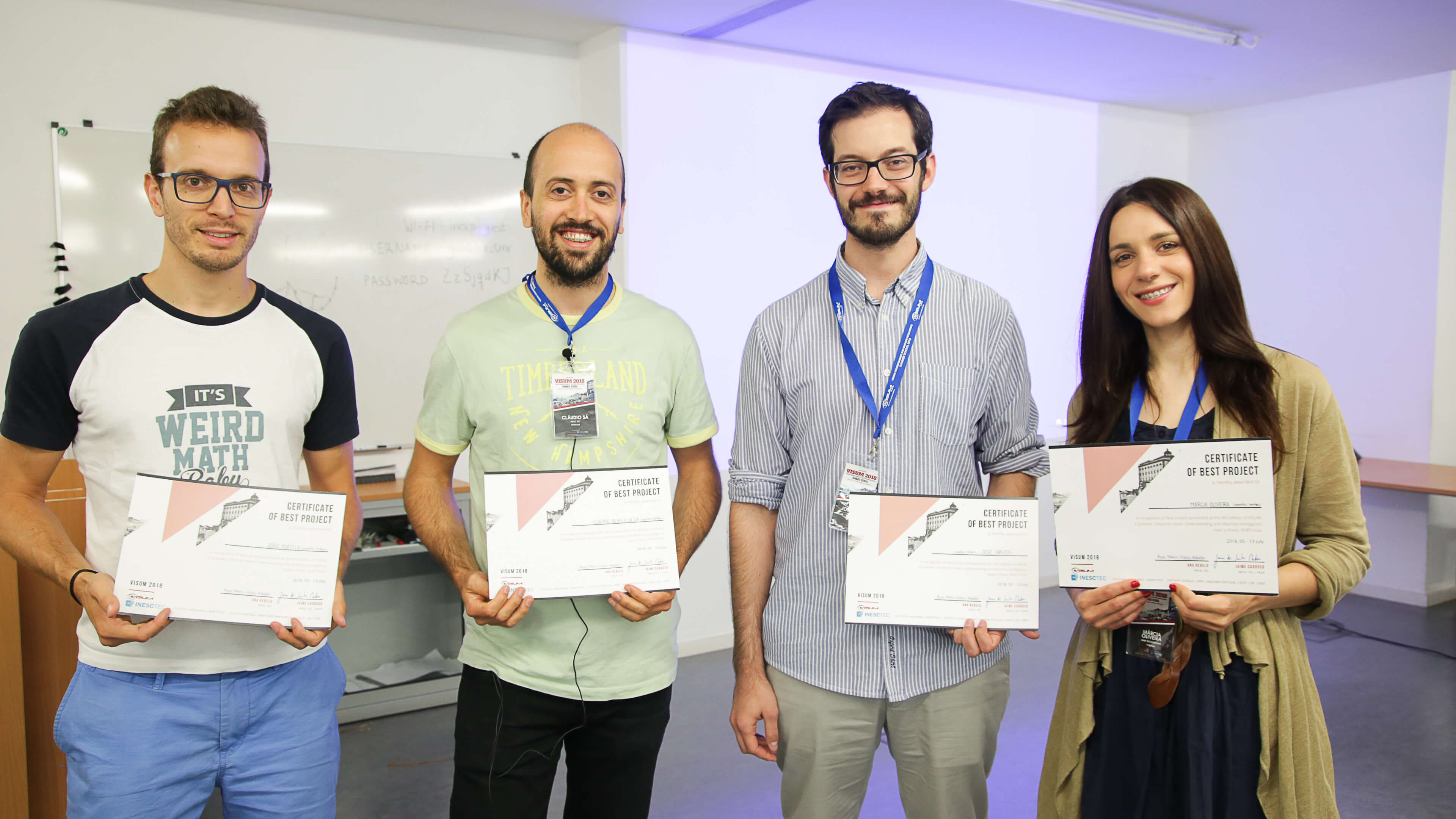 VISUM Summer School was organised by INESC TEC, in partnership with Data Science Portugal (DSPT) and the summer school Feature of Computing of UPTEC, being supported by the Portucalense Infante D. Henrique University (UPT), ScaleUp Porto, Google Cloud, Bosch and UP.